What Makes A Tagine Special? Sharing Is Caring!

It’s the iconic Moroccan dish, and Surf Star Morocco guests absolutely love it!  The tagine’s unique shape (conical lid fitting snugly over a wide shallow base) creates a unique cooking environment.  Steam rises into the cone, then condenses and trickles back down the sides of the lid into the dish. This means that little liquid needs to be added and that the food cooks slowly until tender and delicious!

The Tagine is a reflection of the magical Moroccan hospitality. How? The tradition of everyone sitting around a round table together, sharing food, company, conversation, and time. In Morocco, one of the most precious things are still well kept, time. People really spend time with their families and buddies. They eat together and share their time. It’s a beautiful thing! It can be quite an experience buying a good one from the souk too!

We all love a good summer get together, especially when the sun is shining and everyone has been on some awesome adventures. Impress your buddies at home or even on a camp trip by making a Tagine just like our Surf Star Morocco tagine king chefs the Brahims! Here’s everything you need to know about how to cook a Meat and Veggie Tagine slowly until tender and delicious!

How to Begin Making a Tagine?

A brand new tagine needs to be “seasoned” before it’s used for the first time.  We suggest soaking both the lid and the base in water for at least 2 hours.  Then, drain the water, dry the tagine and, if it’s unglazed, rub the whole thing with olive oil.  Place the tagine in a cold oven, set the temperature to 150*C, and allow the tagine to slowly heat up.  Then after 2 hours, turn off the oven and leave the tagine to slowly cool.  Give the tagine a quick wash and coat it in olive oil again before storing or using it. Now you’re good to go!

Which Ingredients Make A Great Tagine?

Our awesome Berber chef Brahim recommends mixing together your choice of meat (he likes beef or lamb, but chicken tagines are also popular here) in the bottom of the tagine with onions, lots of olive oil, and spices.  You can buy tagine spices pre-mixed at the souk, but if you’re doing this at home, he suggests a combination of paprika, cumin, parsley, salt and pepper!  If making a chicken tagine, he also adds garlic at this stage.
Once the meat has been seasoned, start to add your vegetables (Brahim normally uses carrots, turnips and green beans), arranging them so they form a mound in the centre of the tagine.  Next comes the decoration!  Brahim uses slices of potato and courgette arranged in a conical fashion, with cauliflower and slices of tomato on top.  You can also add olives and raisins for decoration if you would like!  Then add a little more salt, pepper and some parsley to the top, and you’re ready!

Can I Cook A Tagine On The Hob?

Traditionally, tagines are cooked over charcoal!  But if you’re popping yours on the hob instead of the barbecue, make sure you put a ‘diffuser’ (a circular piece of aluminium) underneath the tagine dish. The bottom of the tagine shouldn’t come in direct contact with the heat source or it may overheat and crack. 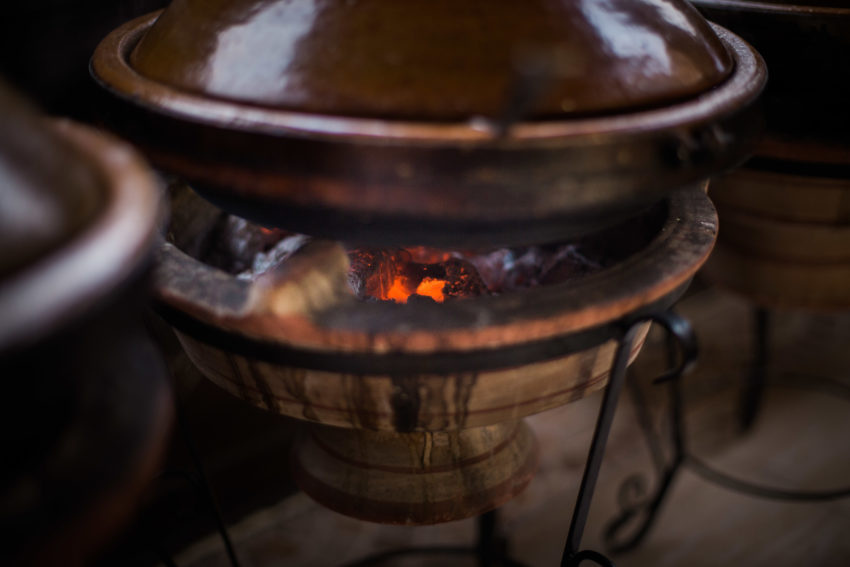 How Long Does It Take To Cook A Perfect Tagine?

At the camp we cook all of our tagines on charcoal braziers; they normally take around 1.5 hrs.  You can also cook them on the hob, just make sure you don’t turn the heat up too high – a tagine should be cooked on a low to medium-low heat.  Brahim suggests keeping a close eye on the tagine to ensure it’s not getting dry – if so, then add a little water.  Conversely if your tagine is too watery, use a spoon to wedge the lid slightly open and allow the sauce to reduce a bit!

Tagines are traditionally eaten communally and using bread instead of cutlery. So grab a bite sized piece of fresh warm bread in your right hand and scoop it up. To be polite you can eat the vegetables first, and then the meat. It is kind to make sure everyone else is getting well fed, so try not to eat more than your fair share. Often people who care about you will push the meat over to your side. It’s a sweet trick to show someone you care and love about them! For an awesome BBQ alternative enjoy your tagine outside on a low round table and sit on cushions. Have a fantastic tagine party and let us know how it goes by tagging your photos with #surfstarmorocco on Instagram and Facebook.

We use cookies to ensure that we give you the best experience on our website. If you continue to use this site we will assume that you are happy with it.Ok